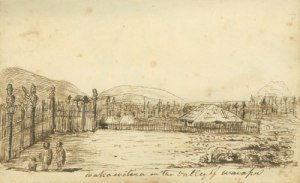 I’m helping organise a workshop on Community Governance, one of the presenters is from Portland, Oregon and we are wanting to give him some background on the local context, particularly Māori in governance roles. This is my (brief) briefing note –  feedback welcome if I’ve omitted or misrepresented anything significant.

Tairāwhiti (“The Coast Where the Sun Shines on the Water”) or Gisborne (the name of a Colonial Secretary for the British Empire who never visited the place) is a region on the East Coast of the North Island of Aotearoa New Zealand.

The population of approximately 45,000 residents includes about 33,000 in the city of Gisborne and the remainder in rural villages and on farms. Most of the settlements are close to the coastline. The population has been declining slightly for a decade or so but the birth rate and youth population is generally higher than the national average.

The ethnic identity of residents is fairly evenly split between Māori and Pākehā (New Zealanders of European descent) with a small proportion of Pacific Islanders (mostly Tongan & Fijian Indian), Asian (Indian & Chinese) and others.

The geographic isolation of the region makes travel to other cities and metropolitan areas a long haul by road and travel within the region can also be challenging as the terrain is often steep and prone to land slips.

The main industries in the region are based on the primary sector including farming, forestry, horticulture, viticulture and fishing. 2.2m tonnes of raw logs were exported from the port last year, and this is expected to continue growing. The increase in farm land converted to forestry has contributed to the population decline in rural communities over the last 30 years.

The original inhabitants of the area are thought to have established settlements in the region between 1200 and 1400 CE. Their descendants continue to reside in the region which is home to about a dozen traditional iwi (tribes) that have been amalgamated into four main tribes: Ngāti Porou, Te Aitanga-a-Mahaki, Rongowhakaata and Ngai Tamanuhiri.

During the early 1800s British settlers signed a Treaty with Māori leaders in an attempt to legitimise their occupation of the islands, but almost immediately after the Treaty was signed, settler political and commercial interests started passing laws and taking action to grab as much Māori land as possible. This resulted in a series of wars around the country between British troops and tribes that resisted the invasion and alienation of their territories. Some tribes chose to side with the British forces in a continuation of traditional inter-tribal conflict. Tribes that sided with the Crown managed to retain more of their land than those who resisted and ultimately had vast areas confiscated to be held by the Crown or sold to settlers.

In Tairāwhiti there are two main tribal areas, the tribes of Turanganui-a-Kiwa (Gisborne city and to the west) lost more than a million hectares to confiscation. Ngāti Porou (an area covering 400,000 hectares north of the city and now the second largest iwi population in the country) sided with the Crown and kept the majority of their land under tribal control.

Most members of Tairāwhiti iwi live away from the area (e.g. Ngāti Porou have over 70,000 members but only 12,000 residing within its tribal boundaries).

The late 1980s followed 20 years of activism to recognise Māori political rights and two acts of Parliament established two tribal governance authorities, one for Ngāti Porou and one for the collective of Turanganui-a-Kiwa iwi.

In the last five years all but one of the iwi have settled claims for historic breaches of the Treaty of Waitangi (signed in 1840), the last tribe is expected to settle with the Crown later this year. Settlements include a formal apology from the Crown for a list of Treaty breaches, the return of some lands, cash compensation (in Tairāwhiti these have been between $20-200m) and the establishment of new governance relationships.

In the case of Turanga iwi, this will include a standing committee of Gisborne District Council made up for six councillors and six iwi representatives. For Ngāti Porou it includes new protocols with various central government agencies that must consult with the iwi, and provide a first right of refusal when disposing of Crown properties, etc.

The NZ Local Government Act provides for local authorities to establish Māori wards within the Council representation system. Very few have ever taken up this option. Based on the regulatory criteria, in Tairāwhiti it would mean there could be up to five Māori seats on the Council that currently has 13 seats. Gisborne District Council has continually voted against this option arguing that it would be discriminatory or that the district would suffer as remaining general wards would be enlarged.

In February 1862 the total Pākehā population on the East Coast (excluding the area now known as Gisborne City and the Poverty Bay Flats) was estimated to be 20, while that of Maori was around 5,000. A report written in 2009 as part of the Waitangi Tribunal investigation into historic breaches of the Treaty refers to a resident magistrate’s recollections of Māori community governance structure that existed before the settler government imposed new structures:

…Every day affairs on the coast at this time were said to be arranged by runanga. [Resident Magistrate] Baker reported that “Almost every village has its own, in which everything, from far country news to domestic life, is freely discussed.”

Based at Rangitukia, Baker defined existing runanga as a community, consisting of any number of persons exceeding one family:
“Thus, within a few hundred yards of my present residence, there is a collection of some three or four huts, the inhabitants of which style themselves “Te Runanga o Pahairomiromi;” the latter being the name of the village. These, and many other similar Runangas, assume all the powers and privileges of the largest Runanga (as at present constituted), and claim to be independent… of any control by the general Runanga, if such a term may be applied to the voice of the mass of the people.”

So there is a strong tradition of community governance and in the ‘post-settlement environment’ we are seeing a burgeoning of sub-tribal groups being re-established as hapū trusts with a focus on the social, economic, cultural and environmental revitalisation and wellbeing of their tribal area.

Māori land in the 19th Century was ‘cut up’ into ‘land blocks’ that were assigned through the Native Land Court to 10-20 ‘owners’ who could convince the courts that they were descendants of traditional owners for particular blocks. This made it easier for Pākehā settlers to purchase land (often Māori had massive debts as a result of surveying costs associated with Court claims that meant they had to sell much of their land).

In the 20th Century, a leading politician from Ngāti Porou, Apirana Ngata, encouraged Māori landowners to amalgamate – under incorporations – their titles into collectively owned land blocks that had been increasingly divided over generations through succession to children. Most of these land blocks have survived and are governed by Trustees elected from all the individuals who have shares in the block and subsequently recognised by the Māori Land Court.

As successive generations increase the number of landowners in each block, the governance issues become more complex and the legislation pertaining to Māori land is currently under review in an effort to make it easier for land block owners to make decisions regarding the management of land so that efficiencies and productivity can be improved. Land blocks are usually managed as a farm, often under lease to a farmer or company utilising a number of blocks in an area – many have also planted exotic pine forests in partnership with overseas owners of the trees which typically take about 25 years to mature for harvest.

The ‘last bastion’ of Māori culture is the pā or marae, the traditional compound where a whānau (extended family) and members of the hapū (collective of whānau) would live and in more recent times, meet just for community events and special occasions. Marae reservations are usually recognised formally through a gazetted notice and Trustees appointed to govern the marae. Trustees may or may not form the marae committee, that manages the day to day affairs like bookings, maintenance and repairs, finances, etc.

Ngāti Porou has over 50 recognised marae, while some of the smaller Turanga iwi have six marae. Marae receive usually receive some income from their iwi, some from philanthropic grants and occasionally a government contract for a service such as supported employment for long-term unemployed, etc. Marae also receive income for events from participants and some have whānau members who donate regularly.

Schools have Boards of Trustees and many Māori are on these governance bodies responsible for overseeing curriculum, finances, strategic direction, student achievement, etc.

Māori participate in a range of mainstream and Māori entities including churches, sports clubs, community organisations that all require local, regional and national governance.