Thanks to a generous gift from the Orangi Kaupapa Trust, I was able (and required as a condition of receiving the gift) to do something I wanted to do for myself. It’s only taken a year to write this brief account of the trip.

Josh Wharehinga (Ka Pai Kaiti) and I had the privilege of visiting Homeboy Industries, an organisation started 25 years ago by a Catholic priest and a few church volunteers in a Los Angeles ghetto. 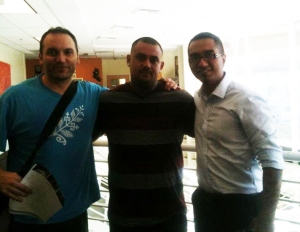 Our tour guide Francisco had parents from two rival gangs, he was six years old when his best friend had his head blown off as they walked to school and were confronted by another young person wanting to know which gang the boy affiliated to. At 14 Francisco had his first child and soon after did a ten year lag in prison after taking the rap for another gang member’s crime.

Homeboy Industries now employs around 300 ex-gang affiliated young people in a number of social enterprises. The people who come to Homeboy Industries typically stay for 18-24 months before transitioning into other businesses around the city.

The organisation bakes 1,000 loaves of bread each day and sells them in farmers markets, a café and bakery. They also run a successful screen-printing business, retail shop and tattoo removal service. A free counselling service is available and during the move to permanent work, a team of employment placement supervisors ensure the workers and employers have access to regular support over the transition period.

Francisco has been with Homeboy Industries for nearly two years and beyond all the work skills, therapy and tattoo removal he has received, the most important thing from his perspective was the unconditional love and acceptance he found in Father Greg and the other people of faith at Homeboy Industries.

Francisco now shares the faith in action he experienced through this group of believers. Rather than expecting these hurt, confused and often distrusting young people to join a church, a community of faith has been established and become a beautiful physical, social and spiritual home for many otherwise marginalised members of society.

I spent three days in Portland, Oregon primarily because I was interested experiencing the ‘cycling capital of America’.

Understanding how the city had evolved over the last 40 years – radical neighbourhood democracy in the early 70s paved the way for resident action while very conservative administrations led the city through the 80s and 90s. Now the city boasts a massive network of cycleways and neighbourhood development projects thanks in large part to the neighbourhood groups established a long time ago.

While the cycleways are an impressive feature of the city, compared to Gisborne and other New Zealand cities, there still seemed to be a high reliance on private cars. I was fortunate to participate in a May Day protest and got a taste of the culture of the city that has been the basis of the brand ‘Keep Portland Weird’ – the quirky, alternative lifestyle ‘dream of the 90s’ is alive in Portland as the ‘Portlandia’ song goes.

On my way to the Red and Black Café, an anarchist coffee shop, pub and bookstore – I popped in briefly to visit ADX, a cooperative space that ‘in a few short years has incubated over 100 start-ups and 200 crowd-sourced projects’ – an impressive shared design and construction space that a number of start-ups use to establish themselves. Kind of a craft and construction version of the Enspiral model we have seen emerge in Wellington. I think there is lots of potential for these kinds of initiatives but the capital and space required needs to come from somewhere like the philanthropic sector, local government or well-established business sponsors.

My main reason for travelling to the USA was to attend the 2nd Annual Conference on Participatory Budgeting in the United States and Canada.

Participatory Budgeting internationally owes some of its roots to initiatives that were undertaken in Christchurch in the early 1990s – these are often cited by overseas practitioners and experts as important models they recognise as leading to further innovations in other countries like Brazil, Europe and North America.

I registered for a pre-conference workshop at the Great Cities Institute at UIC College of Urban Planning & Public Affairs. This was a valuable introduction to current PB practice and trends in the USA.

Following the workshop we attended the opening plenary ‘The People’s Budget: Participatory Budgeting in Mexico, New York, and Chicago’ at Madero Middle School in West Chicago, this was a public event in Spanish with English interpretation – a great example of bi-ligualism in practice and something I envied having raised our children only speaking Te Reo Māori to them. The neighbourhood is very depressed but PB is thriving and a New York City councillor shared her experience of PB as well.

PB projects that citizens can vote for.

I was fortunate to have a presentation selected to share on ‘Public Finance Planning in New Zealand Local Government’, it received a favourable response from attendees. It was in the first workshop session so I got to enjoy the rest of the conference without any nervous wait. I was not disappointed, all of the sessions I attended were inspiring, practical and provocative. I brought home many resources, ideas and contacts that I intend to use in my paid and voluntary work for years to come. The Pacific Centre for Participatory Democracy is an idea I have used for the last ten years and I plan to formalise it over the next few years and I expect PB will be a key part of its work plan.