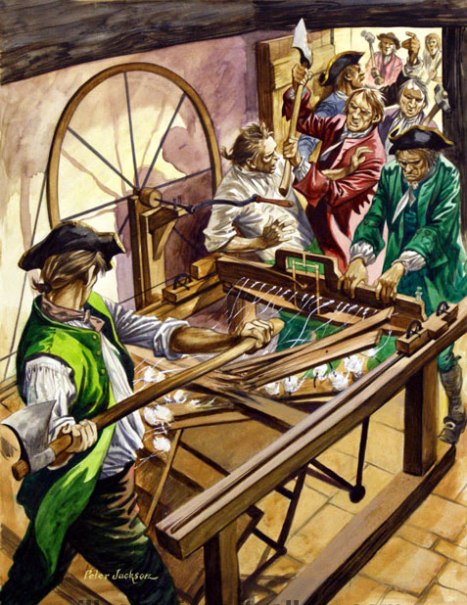 As a regular promoter of new technology (renewable energy generation and use as a replacement for fossil fuels), it’s a little ironic to be called a Luddite.

I would however wear the label proudly, but compare myself to my Dad who has never owned a car, computer or cellphone.

I do try to avoid the self-service checkouts at supermarkets, I know it’s a futile effort but trying to keep local people in a job just a little longer seems worth the extra few seconds waiting in line.

The Luddites were passionate about keeping people in meaningful employment and sustainable communities. If they were around today I guess they might be protesting about our obsession with speed and digital technology at the expense of traditional jobs and a more human pace of life.

A few years back I bought Dad a book about the Luddites called ‘Rebels Against the Future‘. The author Kirkpatrick Sale suggests that the Luddites did not want to turn the clock back. They said, “We want to cling to this way of life; we don’t want a life in which we’re forced into factories, forced onto machines we can’t control, and forced from village self-sufficiency into urban dependency and servitude.”

A modern Luddite is also trying to hold to certain elements of the past to resurrect the community. Neo-Luddites wish to resurrect some values of the past such as communitarianism, non-materialism, an understanding of nature, and a meshing with nature. These things have been largely taken from us in the last 200 years and we must fight to preserve them.

Sale believes “sustainable” is essentially the opposite of “industrial.” Sustainability implies a non-exploitive relationship with nature and a basic self-sufficiency in life. Industrialism can’t allow that to exist because that kind of living would not create, manufacture, use or consume. Sustainability, community and self-sufficiency are antithetical to industrialism.

One thought on “Rebels Against The Future”