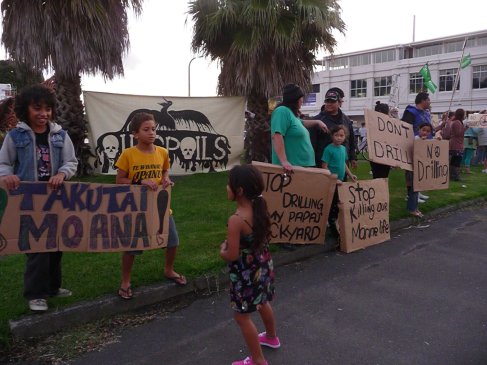 Gisborne District Councillor and opponent of deep sea drilling Manu Caddie said he was pleased to see the back of Petrobras.

“While the Government and Petrobras claim the decision was based on the business case and domestic issues, we know that local opposition was a contributing factor in that business case.

Using the military against New Zealand citizens to protect a multinational oil company and going to court here is not a great look for the Government or the company.”

While the region bore all the environmental risk, there would be little if any local employment from offshore drilling and Mr Caddie said he was ‘disappointed with the way certain sectors of the community fell over themselves to support petroleum development when no objective evaluation of the risks and benefits of various scenarios had been undertaken.

“The Government is only now producing its rather one-sided assessment of the potential benefits to the region while the Parliamentary Commissioner for the Environment is saying there is a heap more risk assessment to be done before a decision can be made on the safety of unconventional drilling on the East Coast.”

“Over 130,000 New Zealanders have said ‘no’ to deep sea oil and the wheels are coming off the Government’s only answer to the failing accounts deficit while the country and this district misses opportunities to secure a sustainable economy.”

We desperately need decent jobs here and a focus on technology, value added land-based industries and manufacturing are the obvious areas that we need to focus on.