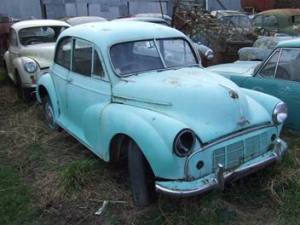 I would like to read the study Alwyn (26/1/12) refers to that suggested a 1960 Morris Minor may be a better environmental option than a hybrid vehicle. I have found a 1960 Morris Minor for sale in Hawkes Bay for $120. It has no WOF or Registration but is “good for parts”.

Of course the most environmentally-friendly option is to not use a car.

In 1994 I read a paper entitled “The Environmental Consequences of Having a Baby in the United States” by Charles A.S. Hall, et al. (State University of New York).

The authors concluded that many people are looking for ways they can protect the environment for the sake of future generations and no doubt controversially recommended that the most effective decision an individual can make to protect the planet is to abstain from making another human being.

The waste management hierarchy of: Reduce, Reuse, Recycle – expresses the order of importance of these ideas and practices. So it would be reduce the demand for vehicles as the first priority, repair and reuse existing ones, and recycle the components as much as possible. Perhaps a fourth step is ‘rethink’ the way we create and consume.

In 2007 a report was published by CNW Marketing Research, Inc., entitled “Dust to Dust: The Energy Cost of New Vehicles From Concept to Disposal.” It was said to measure in dollars and cents all the energy used in creating, building, operating and disposing of each vehicle over its entire lifetime. The report gained worldwide media and consumer attention, mostly because it concluded a Hummer H3 was a better option than the Toyota Prius. The report was quickly discredited after its calculations and claims were proven from a wide range of sources to be completely false and misleading at best (for example the paper “Dust to Dust Report Misleads the Media and Public with Bad Science” by Dr Peter H. Gleick, Pacific Institute, 2007).

Contrary to ‘facts’ in ‘an American survey’ quoted by Alwyn, last year the US Consumers Union tested a 2002 Prius that had done over 300,000km and compared it to the test they had done 10 years earlier on a Prius with only 3,000km on the clock. The report concluded that the effectiveness of the battery has not degraded over the long run. Hybrid batteries are no worse for the environment than the batteries in every traditional motor vehicle. All the hybrids on the market use NiMH batteries, which contain no heavy metals (so they’re not classified as hazardous waste unlike Lead-Acid batteries) and are more easily recycled than alternatives. And I’m not sure where the ‘survey’ authors got their prices from but in the unlikely event of needing a replacement battery they cost about $2,000.

Alwyn is correct that a battery probably uses more energy and resources to produce than a fuel tank. But while numerous reputable studies suggest hybrids are better than traditional cars, when we take into account the energy and resources associated with all the transport and infrastructure costs of cars, it seems the only option will eventually be learning to live without them again.