Miria outside ‘Building B’

I’m sure millions of important words have been written about Tuol Sleng, the notorious prison of the Khmer Rouge that is now a museum commemorating the horrors that took place there and across Cambodia from 1975 to 1979. I think it’s important for me to record some of my reflections, if only for my own sake, but others may care to add their own comments.

The night before we visited Tuol Sleng, our family shared a meal with a couple from New Zealand who live and work in the slums of Phnom Penh. Craig and Nay both grew up in Auckland but Nay was born in Cambodia during the civil war, her father was killed after the Khmer Rouge came to power in 1975 and Nay’s mother fled with her children first to a refugee camp on the border with Thailand and eventually they were supported by a Presbyterian church in Manurewa to come to New Zealand.

I remember my mother being involved with our Methodist church in Tauranga that was supporting refugees fleeing conflict in South East Asia in the late 70s and it was impressive to meet someone like Nay who has chosen to leave the comforts of life in New Zealand to come back with her own children to live and work with poor children in Cambodia.

I asked Craig if there had been a national or local reconciliation process to help heal the country – it seems not much has happened in that space. School textbooks only recently started including any reference to the conflict of the 1970s and it seems most of the younger generation born after the conflict has little knowledge about what happened in the communities of their parents and grandparents during that time.

Miria looking over the climbing frame converted to gallows and dunking pots to ‘Building A’.

We took our 11 year old daughter to Tuol Sleng, I wanted her to know a bit about what happened, even if she didn’t really understand why it happened. Growing up in New Zealand, most children are thankfully protected from the worst excesses of human violence – of course we benefit in many ways from the violence done against the poor in places like Cambodia, but it’s not something we are exposed to other than through television news, documentaries, books and works of fiction (of course Jean Baudrillard would say its all fiction for us).

Her grandparents were a bit reticent about us taking Miria to a place where such horrific acts were committed and commemorated by stark photographs and displays of torture tools and testimonies. I told myself that Miria is mature enough to visit such places – after all, the sites are often not as immediately confronting, but we have plenty of places of mass execution and brutality around Aotearoa that children are encouraged to visit and learn from. It was a calculated risk but I think it was the right decision to take her.

One of the real tragedies of Tuol Sleng is its original purpose as a high school built in the 1950s – seeing how classrooms and children’s play equipment were perversely converted into places of imprisonment and tools of torture must break the heart of most visitors. The heaviness of the place overtook me before I even entered a building – the place has been left largely as the Vietnamese soldiers found it in January 1979 and first thing you see are the fourteen graves of the final victims found bolted to torture racks inside Building A. 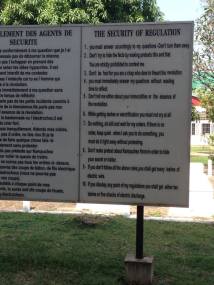 In ‘Building B’ haunting photos taken by the captors of thousands of victims stare back at visitors from display boards. I felt obligated to look each one of them in the eye as we passed through room after room – many looked like they were in their early teens, children were also brought to S-21 but most were not photographed in the formal portraits imposed on older victims. Some faces were battered and bruised, many looked petrified while others were expressionless – either they didn’t know what was going to happen to them, or seem to have a resignation and calm about their fate that must have come from a place most of us will not know.

Paintings by an inmate of the torture and killing techniques line the walls of classrooms and present a graphic depiction of how the senseless violence was inflicted on people who usually had no idea what the crime was they were accused of. Inmates at prisons similar to Tuol Sleng all over the country were tortured until they confessed whatever the Khmer Rouge wanted them to say, which inevitably led to a conclusion of guilt as an enemy of the revolution and execution at one of the many ‘killing fields’ that became mass graves across Cambodia.

Miria asked the inevitable questions about the motivations of the Khmer Rouge, the failure of their version of radical Communism and establishment of Capitalism and inequality since the demise of the regime from 1979. She didn’t seem traumatised by the experience and was certainly engaged by the gravity of the place, the unforgettable images of victims and particularly by the written narratives of both survivors and those who perished.

The perennial question of how could otherwise ‘good’ people do such terrible things to others has been asked and answered for many similar contexts. 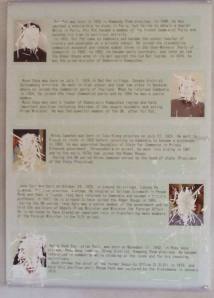 It is important that these memorials to 20th Century genocide in Cambodia, Rwanda and Europe exist. Such memorials to atrocities often provide important opportunities for the families of victims to get information on what happened to their loved ones – the Khmer Rouge left all the documentation on their victims. The faces of many Khmer Rouge leaders have been scratched out on the displays but the families and decedents of victims come from across the country and around the world to S-21 as part of their healing.

Most of the visitors to Tuol Sleng are foreign tourists and the $2 entry fee for foreigners seems a wasted opportunity to raise desperately needed funds to develop the facilities as the custodians have a stated goal of returning the former high school to a proper place of learning that can develop more educative resources about what happened there and during the 1970s in Cambodia. I think most foreigners would pay at least $50 for the opportunity to visit Tuol Sleng.

The ethics of genocide tourism are interesting, I’m sure plenty has been written about this popular practice that could be considered a privileged kind of voyeurism that revictimises the Cambodian men, women and children who suffered under the Khmer Rouge. On the other side of the argument, the descendants of survivors and victims want more people to know what happened in the hope that there will be some justice for those who have suffered and an perhaps opportunity for reconciliation when the truth however painful is acknowledged rather than ignored.

There were a range of other personal experiences and reflections for each of us – that won’t be shared in this format – needless to say the visit will inform our lifelong learning about the problems and power of evil, ideology, propaganda, ignorance, apathy, memory and forgetting.